This web site is about our experience with the Mexican Folkloric Dance Company of Chicago, www.mexfoldanco.org  from its founding in 1982 and the years before the founding.  It is now dedicated to my late wife Juanita; we talked about marriage at age 12, married at 21 and had a wonderful 61years, 2 months and 6 days together. She was my  inspiration for all that we did together. 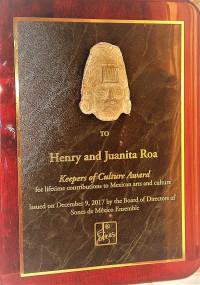 On December 9, 2017 we were honored as the inaugral recipients of the "Keepers of Culture" award for our lifetime contributions to Mexican arts and culture. Initially I was to be the awardee however I requested that my late wife should be recognized too because she was the integral part of everything I accomplished just as I was the integral part of everything she did.

View this touching video, of our life, that was shown at the gala.

Another reason for this discourse is that I do not want the history of the Mexican Folkloric Dance Company of Chicago lost if ever it disbands. Many organizations that went out of existance have been forgotten as if they never existed at all because they never thought to record their histories. Some may have had web sites but the sites were eventually deleted from the web because they were not cared for and the annual fees were not paid. 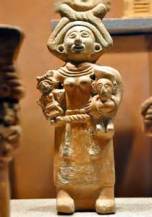 This site also serves as a vehicle to present my paper on Our Lady of Tepeyac (Guadalupe as she is universally known). View it in the PDF link below.

Her temple at the hill of Tepeyac was destroyed by the Spaniards. When Mary appeared to Saint Juan Diego and his uncle Juan Bernardino, a church was built at the site and the natives adopted her as the new Tonantzin because one of the things she told Saint Juan Diego was "Am I not your mother?"

But the Spaniards, through a misinterpretation of Juan Bernardino's account of Mary's apparition, called her Guadalupe after their Santa Maria de Guadalupe in Spain. However many of the indigenous still refer to Mary as Tonantzin or Tequantlaxopeuh. The picture is one of several renditions of Tonantzin. 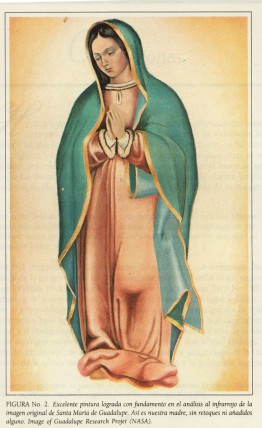 This is what Mary actually looked like on Saint Juan Diego's ayate blanket before changes and additions were made to the original image.

Spanish text below the picture says it. Text is enlarged on page 7 in the PDF link below.

This is explained in the PDF link, below, by Henry A. Roa

View the paper at the PDF link below.

I do not wish to disabuse the way Mary is venerated. That will never change.

I just want to inform of what I have learned since Padre Jose de la Luz Silva's 1984 strong homily on the subject.

The late Chicago Cardinal George and the the present Cardinal Cupich both thanked me for the paper as have other clergy. Forward this information to your contacts.

Mary appeared horizontally on St. Juan Diego's ayate because the image is too tall to have appeared vertically.

It is explain in the PDF below. 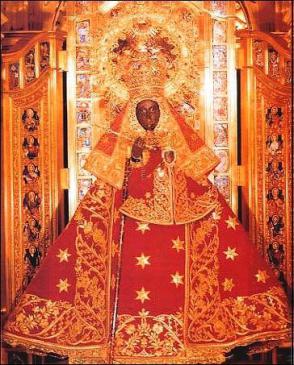 This is the true Santa Maria de Guadalupe, holding the Christ child.

It is a wooden statue, less than two feet tall, housed at the

Royal Monastery of Guadalupe in the

in the town of Guadalupe, Spain.

There is a replica in the Philippines. 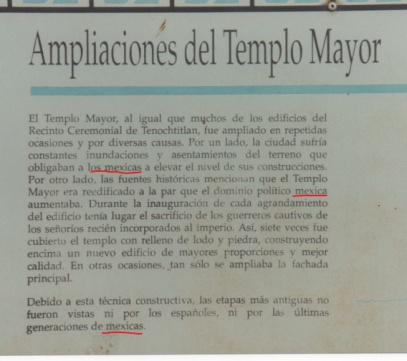 I have inserted this picture of an information tablet at the excavation site of the Templo Major at the northeast corner of the Zocalo in Mexico City. I underlined "Mexica" (May Shee Kah) to show that it was the name that the people of Tenochtitlan called themselves, not Aztec as so many writings have called them. The origin of the word Aztec is debatable.

Another tablet picture is shown below.

I took these pictures on one of our trips to Coatzintla, Mexico 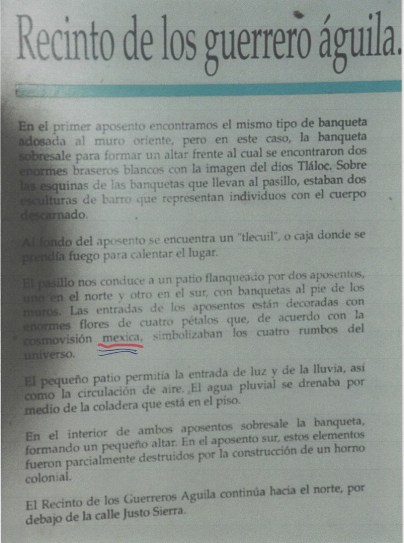 I will include other information on other subjects so that it will help me when I correspond with anyone on other matters, I can guide them to this site.